The Vanishing City is an interactive audiovisual installation that transforms the gallery space into an emotional disaster site. Filling the gallery with sound and video of collapsing buildings, the work taps into social anxieties surrounding disaster—our collective fear of collapsing structures; from the twin towers of the world trade centre, to the world financial markets, to our own personal relationships.

The interactivity of the work draws the visitor in, with each step causing the environment to respond with sound and imagery until the once dormant gallery space comes alive. The Vanishing City places the gallery visitor in the eye of an aesthetic storm, where the possibility of imminent disaster seems enveloping.

The Vanishing City has been exhibited at Firstdraft gallery in Sydney (29 April – 16 May 2009).

The Vanishing City will be exhibited at the Armory Gallery in Sydney from 17 June – 19 August 2012 as part of Excavation. 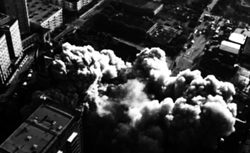 This project is assisted by the Australian Government through the Australia Council, its arts funding and advisory body.